We checked out of the Speke Resort Hotel and set off on a 2½ hour bus ride to Jinja, the former Ugandan capital, to take part in a community outreach day with the East African Tag Rugby Trust. The England Counties players had arrived much earlier in the day and had split up to work with eight local schools to train them for a tournament to be held at the Nile Rugby Club that afternoon. 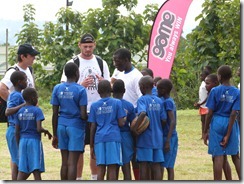 When we got to the club the teams were getting ready for the competition with their guest coaches keeping them busy with warm up drills and games.  The Tag Rugby Trust was looking after the tournament and briefed the players on the rules and importantly the ethos they were trying in instil in the children.  The Trust is a voluntary organisation now working in six countries and although I had heard of their work it was very interesting to see them operate first hand.

The Trust relies on volunteers who spend their holidays coaching tag rugby and spreading the game of rugby around the world.  Since 2002 they have operated in Romania, Kenya, Zambia, Rwanda, Mexico as well as Ethiopia and talking to some of those involved it is

clearly an organisation that deserves the support of National Rugby Unions.  Go to www.tagrugbytrust.co.uk to find out more.

Watching the tournament we were all very impressed with the standard of play.  I was particularly taken with the support play and the way that they tried to take the ball at speed, something that back home takes a long time to encourage children to do, but here they were naturals at it as they were with their passing and catching. 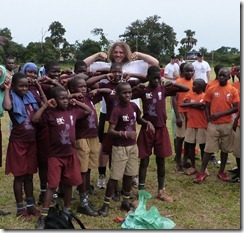 The players coached from the sidelines and refereed neutral games and I have to say how good they were in terms of enthusiasm and encouragement.  One of the teams was deaf and their coach, known as Henry the Eighth because of his build and facial hair, was brilliant with them.  I managed to referee a couple of games and despite the vociferous support the discipline shown by the schoolchildren was excellent.

It was a long day for everyone but all found it incredibly rewarding and the children will remember the day for a long time.  For many of the England Counties players it was the first time they had got involved with coaching tag rugby and it was clear that they had learnt a lot not just about how to relate to children, but also about themselves and what they have to offer the game other than playing.

The England squad climbed back into the coaches for the arduous drive back to Kampala, up to three hours on bumpy roads, while the supporters party had arranged to stay locally, more of which in my next article.

This site uses Akismet to reduce spam. Learn how your comment data is processed.